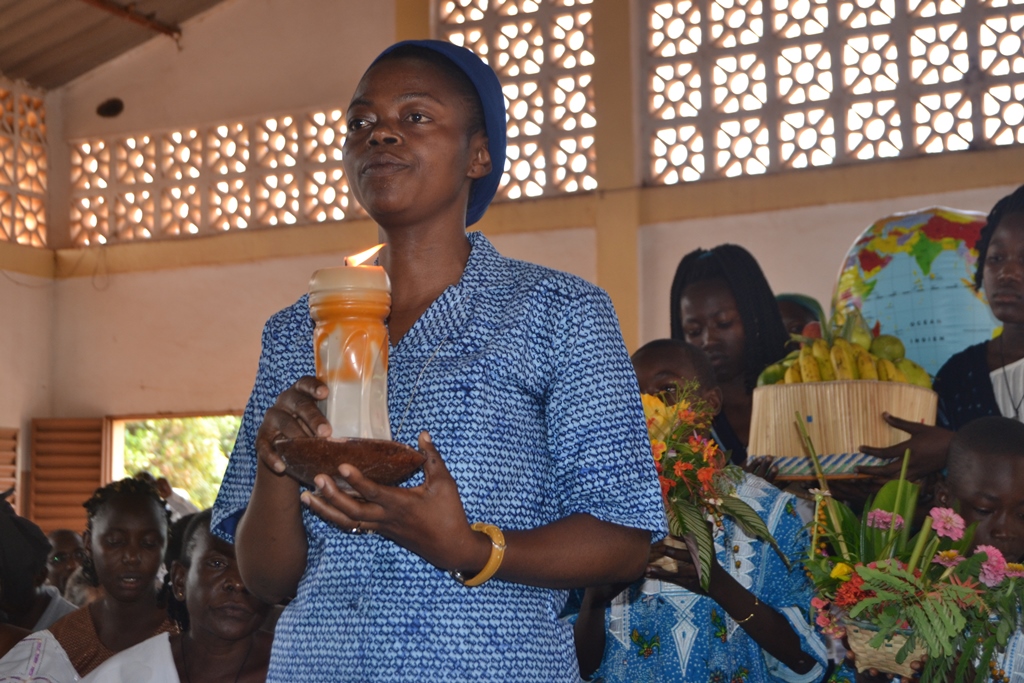 « “You have seduced me O Lord, and I have let myself be seduced; you have overcome me, you are the stronger” Jer. 20:7.

I am of a Christian catholic family of 9 children, 6 girls and 3 boys, and I am the third child of the family.
The story of my vocation is a long pathway which began in my childhood, by a strong attraction to go to the house of God, to be there. As the psalmist says: “this is what I seek, to live in the house of the Lord, to admire the Lord in his beauty and to contemplate in his temple…”

At the age of 9 I followed my school teacher, who was the president of the Legion of Mary group; when I got there, I sat at the entrance to the church, for the time when he directed the meeting and prayed the rosary with the members of the said group. He then invited me to join the group. With them I learned to pray the rosary, and all the mothers said to me “You will be a sister”, but at that time I did not understand what those words signified: “To be a Sister”.

As an adolescent I committed myself in a group called the Young of the Light. (Bilenge ya mwinda, in Lingala). A group founded by a bishop, Monsignor Matondo KwaNzambi, with the aim of helping young people to draw close to Christ, to know Him and to live according to His teaching.
With the young girls and boys who were part of this group, we lived in fraternity; that is why we called ourselves “Ndeko” in the singular, or “bandeko” in the plural, which according to who is being addressed, a girl or boy, means brother or sister.

At a day of recollection, during the mass, the parish priest, the chaplain of the group, preached, commen-ting on the reading of the Acts of the Apostles, chapter 14, verses 21-25. In his homily, the priest addressed himself to us saying “Maybe that among you, there are people that the Lord is going to call to be at his service”, in saying this he invited us to be available to our commitments in the Church that we had already made.
I was very touched by these teachings, and since then, I searched to know what was God’s call for me.
I continued my formation in the movement enthusiastically, and also putting more seriousness into my studies.

When I was already an adult I followed a group retreat (marantha retreat) which aimed to “awaken vocations”, whether for marriage, or for the religious life or the priesthood, with themes that would help us to become aware of what God has given us as gifts and talents, in order to be able to put them at the service of others.
It was in the course of this retreat that I took the decision to commit myself in the religious life which would become the terrain that would nourish me and would help my gifts and talents to blossom, in putting them at the service of the poorest.

Basically, what helped me to make the choice of congregation :

*Fraternal life- which had led me towards Christ, and Christ himself who had orientated me towards the poor, the others.

*The announcing of the good news: by animating retreats, sessions and the accompaniment of the young in their Christian life.

As it was organised in the parish, I spoke to the parish priest, who gave me a book “The harvest is great”, where there is a description of many congregations and their charisms.

Going through this book I was touched by the charism of the congregation of Little Sisters of the Assumption: “To procure the glory of God through the salvation of the poor and the little ones.”

I can say that I am happy in my life as an LSA, after these 12 years of experience and of life, I can say that it is the fidelity of God which supports me, the life of prayer, the love and friendship lived in fraternal and intercultural community, with my sisters and collaborators in the mission, the faith of all those who share daily life with me, all the people to whom I am sent.

My missionary itinerary unfolded as follows:
I was in mission for two years as teacher in the pre-school Tokola lisanga, in the DR Congo/Kinshasa and in 2011, I was sent to Spain for a missionary experience outside my country; from there I was sent to Burkina Faso from the 24th July 2012 to October 2019, where I trained as a general nurse for three years, and worked as a full time nurse in a private clinic for two years; presently I am sent to the community of the pre-novitiate in Lima, but before that I have been in Colombia to learn and practice Spanish in the community of “Acogida “in Bogota.

In my sharing I would like to underline that I am relying on the faith of my mother in my journey in following Christ. To conclude I confide to the Virgin Mary, the first in this journey, all our pathways of life and mission, so that it will be she who will inspire us.