History of my vocation as Little Sister

History of my vocation as Little Sister 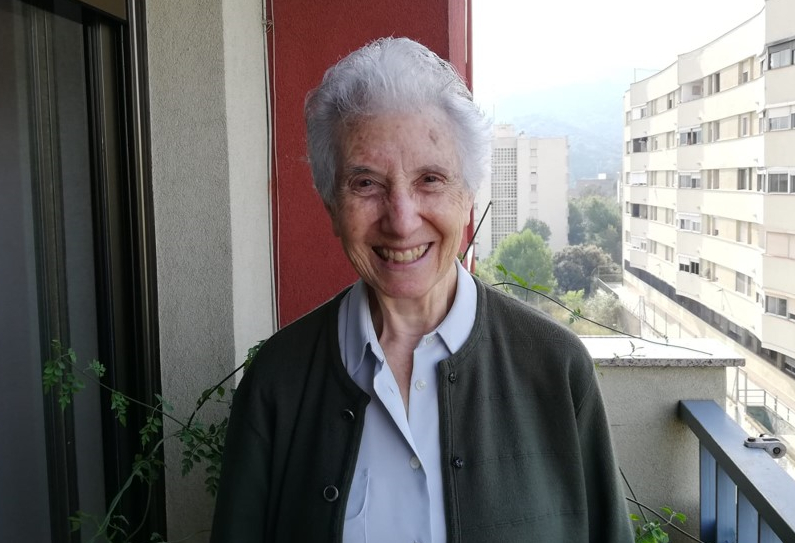 I was born on 16 August 1933 in Tossa de Mar (Girona), a small village on the Costa Brava. My parents, Tomás and Assumpta, had four children, I was the second. My maternal grandparents lived in the same village, on a nearby farm, and my father owned a modest cork factory.

The Spanish Civil War deeply disturbed the peace of this small village and of all the towns in Spain, and I learned from my parents about the atrocities and restrictions that lasted for many years. Close to the house, shelters had been set up in the mountains, and as soon as the siren sounded, we would run for refuge… Years later, as innocent children, we would use them as hiding places for our games… In the summer, our cousins would join us and we would go together to explore the cliffs, the beautiful sea caves, the mountains, the fields and the springs…. And in the evenings we would gather in the grandparents’ farmhouse with our parents, uncles and aunts.

From a very young age, I felt the kindness of my parents. When I was four years old, a fisherman gave me a beautiful fish and said: “My little one, give it to your father… You don’t know what kind of father you have. “He had supplied him with free petrol so that he could continue fishing. On the occasion of the feast of the Cross, a prize was given to the children who had made the prettiest cross with natural flowers. I was six years old when my cross won the prize. My mother said to me: “Daughter, do you want to share your prize with children who don’t have much to eat? “Yes, of course! “and we both went to give it to them… I got to know this family… and I will never forget it.

The trust and immense affection of our parents more than made up for the lack of fantasy… Their deep faith was expressed in kindness, service, compassion…

At the age of 9 I left the village to become a boarder in a school run by nuns in Lloret de Mar, until my third year of high school. I studied, but I was very bored. When I was 12, we went to live in Barcelona….

That same year, my mother became pregnant with her fifth child, of which I was to be the godmother. July arrived and we were excitedly waiting for the birth. But one day my mother said to me, “Daughter, I don’t feel well, your father is going to take me to the doctor”. Then they came home and said, “The doctor doesn’t understand why I am complaining. Everything is fine”; that evening she had a fever of 40°C… the delivery was very difficult… a martyr: the little baby, Assumpta, had died. And two days later, in spite of numerous transfusions and antibiotics, my mother died, serene, trusting in God. She had sent for me the day before: I caressed her arms, which were bare because of the July heat, while wetting her with my tears… and she looked at me with a love that was impossible to forget: “My little girl, I am going to God… I have received Him… I am happy… Now it is your turn to look after your brothers and sisters”. “Take the baby’s dress and ask the lady at the haberdashery to exchange it for an undergarment for one of you”, and then, pointing to a drawer in the chest of drawers, “you’ll find a scarf for Maria, a tie for Vicente, socks for Remei, etc. etc. When you go to Tossa, give them something from me. When I arrived in Tossa, between hugs and tears, I gave them all the little gifts she had given me.

My life changed; I became very thoughtful. I had a lot of questions about faith… I loved my brothers and sisters, my father, my grandmother, my uncle… When I was 16, I was very marked by days of prayer and I began to take courses in the little school for domestic workers.

One day, when I opened my desk, a sentence flashed through my mind: “You will be a nun”. I closed my desk suddenly and said to myself, “Never! I will get married and have many children like my mother. But the scene happened again and again…

On the day of the Immaculate Conception, I consecrated myself to the Virgin, and that same evening I celebrated in the Palau de la Música (Palace of Music) with my brothers and sisters, without telling them anything. I was 16 years old; a year later I renewed my consecration to Mary and I understood that the best way to celebrate it would be not to miss school. I spoke to the nun who supervised the study and she introduced me to a priest. After talking to him, I told him: “I want to be a nun”. “You are still too young”, he replied. I was convinced. And I started during the summer to get up very early every day to go to mass on my bicycle, 3kms away.  On the way back I would do the shopping. When there was thunder, I would sing the Magnificat to drive away the fear. Also at this time I began to visit Jesus in the Tabernacle, without my family knowing about it. I would climb a magnolia tree, pick a flower or two, and place them next to the Tabernacle; I would sit on the first bench and let my heart speak. Then, in silence, I would listen until I thought I had the answer.

Then came a period of perplexity. I would say to God, “I said yes, but there is no congregation that attracts me… So you figure it out.

I wanted to study to become a nurse. But the day before I was to enrol, I received information about the school of social work. In this school, in the midst of this very ‘restless’ youth, there was a PSA, María Miret, who was also starting her studies: She was very close to all of us and involved in our “little strikes” to update certain traditions… and imperceptibly, she spoke of the mission of the Little Sisters; moreover, we took the same tram and we continued to chat…

Time passed, until one day, as the tram was going around the Plaza Bonavona, an immense light came into my heart, so strong that I said to myself inwardly: “I am going to be a Little Sister of the Assumption. I have never been able to forget it. Much later, I read this sentence of Fr. Pernet: “In the things of God, everything begins with the light” and I remembered what a Sister of Jesus and Mary had said: “We did not give you a sign, because you seemed to be attracted by the poor. “

I asked the Community of San Gervasio if I could go with the Little Sisters to work with the sick in the families, I went with Sr. Delfina Zorita to Enriqueta, a young abused woman, living with her two teenagers in a basement. She was very ill with kidney disease. I took care of her for a long time, in the absence of Sr. Delfina who had taught me the basics of care, meals, respect and discretion etc., all with great delicacy. These few months have remained engraved in my mind. Between Enriqueta and me, a deep friendship was born that has lasted forever…

I was 19 years old when I was invited to a wedding in Tossa de Mar, I was seated at the table next to the town’s attending physician, L.B. It is difficult to describe what happened, but it is certain that we were both deeply “struck by lightning” (attracted to one another). We started to see each other and my bicycle became my inseparable companion. However my suffering was immense… once again, I went many times to sit by the Tabernacle, talking in silence, listening… One day, I had to explain myself to L.B. “Do you have someone else? ” So I told him about my Life project. We both cried. The next day we met at Mass… he congratulated me cordially. The rest is in the heart of God and many people and in working-class families.

What about my family? I thought about it a lot… but some people I trusted said to me: “If you don’t do it now, you’ll never do it”. My brothers and sisters were still very young. Juan, who had loved my mother so much and looked after her; Núria, who became the mother of 6 children, helped me a lot with her friendship which still lasts. Pilar was only 13 years old. It was very risky. I loved her as if she were my daughter. My maternal grandparents were devastated by my decision… but little by little they accepted it and were even happy about it…

On June 21, 1954, the feast of St. Louis Gonzaga, after saying goodbye to each member of my beloved family, I entered the Community of the Little Sisters of the Assumption in Sarriá. My father accompanied me carrying my suitcase and I was on my bicycle.