History of a rice field, in Madagascar. A march in hope

History of a rice field, in Madagascar. A march in hope 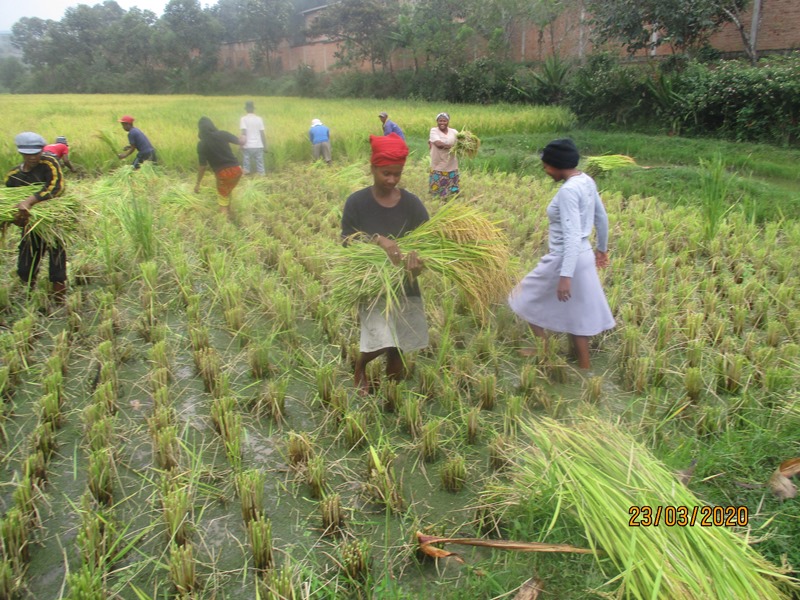 It’s a very long story. It all began in 2014, on the occasion of the visit of the Superior General to Madagascar. We, the Little Sisters of Madagascar, wanted to give our participation in the resources of the Congregation through self-financing. We are interdependent in the Congregation, so we want to give our contribution by assuming a part of our daily expenses.

Sister Odile and Sister Charline have been trained in Antsirabe in “AGV” a social enterprise, an international organization that advocates capacity building in developing countries. AGV envisions a society in which talents, skills and experiences are developed for personal and community development.

The desire for a land matured in the heart of Srs Louisette, Charline Odile; and through perseverance, the flower has borne fruit. The dream became a reality.

This land, situated near the community of Ampopoka, consists of a modest rice field, a space for the cultivation of fruits and vegetables and a house in which our caretaker lives for the time being.

It has already allowed several people to do a daily job. These beneficiaries were happy to have found a job, because when there is no work, poverty sets in.

For the work that we, the Little Sisters, cannot do, we hire parents from families that come from our neighborhood (Sahalava and Ampopoka).

Most of them have already done the training on family self-financing.

We emphasize that we want to give work to those who do not have it with the desire to be autonomous; and thanks to this project we can accompany them on this path.

For the management of this land, we have established a contract with Mr. Michel, a technician who will accompany us on this project in 2019-2020.

Then the second crop in the “Tanety” culture, i.e. on the land, cultivation of fruits and vegetables such as beans, corn, peanuts and fruit trees. Then the third is the off-season cultivation which will take place later.

March 23, 2020 was the day of the first harvest of rice grown on this new land. The weather was good, without too much sun and rain. All of us were there from 7 a.m. The men went down to the paddy field and cut the ripe rice. The women picked the ears, tied them into sheaves, placed them on their heads and carried them to the top of the field. There, the men and some women threshed the rice and the ripe grains were easily removed. Then the bare stalks that were still on the ground were separated from the grains, which formed a compact surface under our feet.

By the end of the morning, the rice field had been harvested and the rice bags were full.

This harvest time is a real work of solidarity and collective efforts. Each one of us gets down to work and joins the others so that all the operations can be carried out.

The harvest is a family work because it creates bonds of mutual help and celebration among us. It produces in each one a great joy and satisfaction. It also participates in the care of the earth because agriculture is the soul of our planet earth.

It means allowing each and every one of us, the families in our neighborhoods and communities, to produce our own food, which is a fundamental human right.

The Charism that we have received calls us all to work together with our people so that each one can live with dignity with other people. Working the land also develops this dignity. Today more than ever, we are called to ensure that each person can work, live, be nourished and grow through education, culture and faith before God and humanity.

But the harvest wasn’t the last step. It took days of drying and tossing to fill our rice bags.

Rice at home is our food, it gives us strength, health and life, it is a human right to produce what we need to live, it is above all to recognize our dignity and our life before God and before our people with whom we have made a covenant. The bags full of rice were twelve, they were well stored they are our greatest treasure.

For this first rice harvest, there were about 1200 kg of rice. That will be enough for our two communities for seven months.

And God saw that it was good!