The Pope in Madagascar in september 2019

The Pope in Madagascar in september 2019 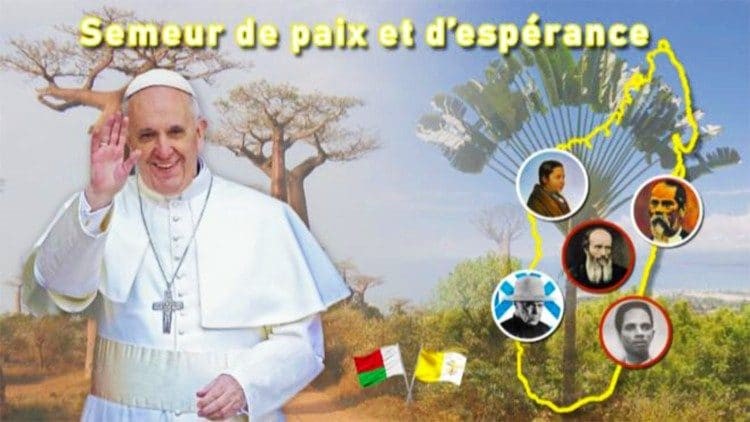 Bearer of the theme: “Sower of Peace and Hope”

For many weeks, our entire country had been preparing spiritually for this long-awaited visit through prayer in religious, parish, diocesan and other communities. Our whole country had also prepared this visit materially and politically. Our President had set up 700 police officers, 200 surveillance cameras, to ensure the safety of the Pope and the faithful; a 60-hectare park had been built for the celebrations. The state had also organized all the travel of all the pilgrims from all over the island and traffic to Antananarivo.

We, Emilienne and Charline (PSA, Ampopoka, Madagascar), were present from Saturday evening, the 7th, to live the youth vigil until Sunday evening when we experienced the meeting between the religious and Pope Francis. We had the joy of living the great Eucharistic celebration on Sunday morning.

The heart of the Pope’s message is embedded in the “fihavanana”, a central element of our national culture, expressing our sharing / Solidarity / Mutual Aid.

It has strengthened our faith by articulating our fight against corruption, exclusion and poverty and our contribution to human development.

We would also like to tell you that the Pope first met our President and the official authorities of our country. He was received in Iavoloha (presidential palace) and there he firmly reminded everyone of the duty to commit themselves against corruption but also against speculation, the duty to fight deforestation and the duty to respect the environment by avoiding throwing waste everywhere; and in the same way, the duty to care for the most venerable of our people. That same afternoon, he met the episcopal body of Madagascar and went to Soamandrakizay at the end of the day to experience the youth vigil. We were 12,000 participants. It is there that Charline and I, Emilienne, have been waiting for her for many hours with Hope.

We heard the testimony of two young Malagasy people: Rova Sitraka and Vavy Elyssa. The Pope challenged us by saying to the young people: “You are the future of Madagascar, be proud to be Catholics, to be in Christ. You are witnesses to Him when you are in solidarity, when you respect the environment. In the midst of a plural world in which there are many other religious expressions, be proud to be witnesses of Christ, to confess your faith. Do not expect everything from strangers because it is you who must work in order to respect Creation and the most vulnerable among you… You must stand up! »

The night was cold, and the next day, the wind blowing vigorously carried a fine reddish dust impregnating our bodies and clothes. However, courageously, our happiness far exceeded all the natural discomfort and harshness that we often experience here in Madagascar. During the Mass celebrated in Soamandrakizay, one million faithful were present, Pope Francis urged us, the Malagasy people: “Make your beautiful country a place where the Gospel can become Life! » At the end of the Mass, the Pope prayed the midday service at Carmel where a delegation of contemplative nuns from Madagascar gathered. He reminded them of the importance of the small steps of love necessary for religious life.

In the early afternoon, he went to Father Pedro’s association “Ankamasoa”, meeting workers and their families in the quarry. The Pope stressed the value of education, courage and work that enhances human dignity and lifts people out of poverty.

In the late afternoon, after a transport in the middle of the streets of the capital, Emilienne and myself Charline arrived to meet the men and women religious. The Pope reminded us how much our prayer through Adoration and Praise, as well as our Proximity to all people and our Fidelity, were the face of our religious life here today. As long as we are missionaries, we are on an outing, sent to the outskirts and available to meet for the proclamation of the Good News. He reminded us not to let our missionary joy be stolen, because he said: “It is better to meet a demon than a sad nun“. “From this visit, I feel that Pope Francis has recognized the dignity of our country Madagascar. “says Emilienne; as for me, says Charline, “This visit of Pope Francis encouraged us in our faith in Christ, we who are a believing people, He has strengthened us in our identity, as Christians, in the midst of a multi-religious world and sometimes far from the Christian faith. »

Emilienne and Charline -Little Sisters of the Assumption in Madagascar