Love is transmitted in Vietnam

Love is transmitted in Vietnam 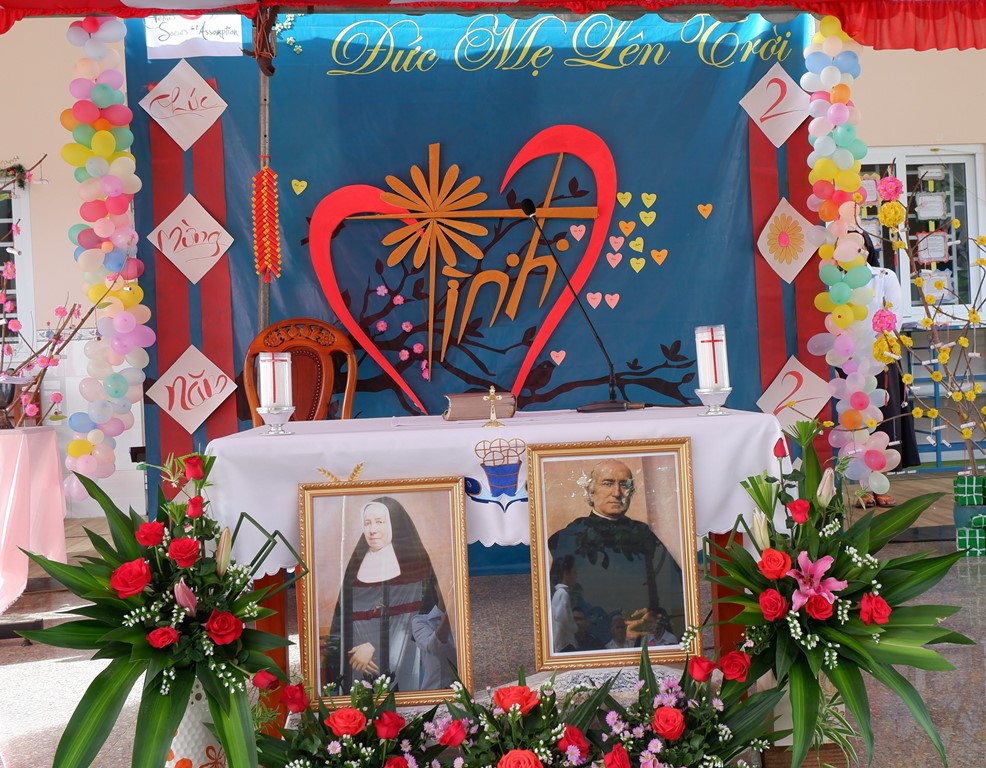 For the past two years, the Little Sisters of the Assumption in Vietnam have organised at the end of each year, or at the beginning of the New Year, a fraternal gathering followed by a meal for all the families in difficulty who they had visited and accompanied. This year, the number of participants was bigger due to the presence of families and young people from the Congregation’s ‘Sao Mai’ scholarship group.

Mornings start to become chilly during the first days of the year. But this morning, in particular, everyone felt warmed not only by the sun, but by the ‘human warmth’ brought by the many people present who had come to attend the fraternal gathering and share the meal with the Little Sisters

By 8.00 a.m. the last preparations were completed and ready to welcome our friends who arrived in small groups. There were people from the different neighbourhoods of Hooc Môn, the 12th, Gò Vấp, Bình Thạnh, and Thủ Đức. They arrived very early so as not to be late for the meeting. All the Little Sisters were enthusiastic and happy to welcome each person, even though for some, it was the first time they had met them. I was moved and touched to see the difficulties of our disabled brothers and sisters getting out of the car and walking in the courtyard; others needed their wheelchairs pushed; some were limping, others had faces marked by the struggle to earn a living and by physical and/or moral pain; there were also smiles, and simplicity and the joy of children. There were people in good health pushing wheelchairs for the disabled. Some participants were limping, others accompanied the weakest and there were the students. The Little Sisters payed attention to each person while writing their names down. It was as if they were all drawing a beautiful picture together and telling the dream we all share of a world where we are all brothers and sisters, and where charity resides.

Discovering the love of the Lord

We began with Sunday Mass – the feast of the Epiphany – attended by all, in an atmosphere of union and togetherness, offering to God all that dwells in our hearts, including our wishes for peace for the New Year.
The celebrant’s homily deeply touched the heart of each person, especially those who bear suffering and sorrow within themselves, as the Father invited them to rediscover the face of God – the Emmanuel, the One who, out of Love, embraced human life, and came down to earth to bear the fragility and suffering of human beings, and today it is He Himself who reveals Himself to all people in the form of the fragile little baby Jesus. And when He manifested Himself in this way, it was to say that ‘God is with us’ in all the events of life. God loves and suffers human suffering. Certainly, all those present at the Mass felt comforted and strengthened in faith and hope when they understood they were loved by God and were accompanied by Him. As for the Little Sisters, they gain the conviction of their noble vocation and mission to serve the poor, and this is what urges them to become ‘God’s instruments’ to be close to, to support and take care of those who have no voice – the poor and the handicapped – so that ‘your actions speak Jesus Christ’ according to the Charism of the Congregation.

Fraternity gives of itself

The Mass was followed by a fraternal meal, alternating with food, song and dance episodes by the students, games, and riddles… so that everyone was able to participate; others contributed to the joy of all by singing. To wind up, scholarships were awarded to students in difficult circumstances. The joy and laughter during the party seemed to alleviate the worries and difficulties in providing for daily needs. It was also during this feast that they shared their feelings, empathized with each other’s many concerns, and their many dreams and wishes for the New Year were written down and would be read during the community’s prayers. Brotherhood was expressed through the attentive listening, compassionate sharing and thoughtful gestures that some showed to others. This context reminded me of the encyclical Fratelli tutti (excerpt #8) on fraternity and social friendship in which Pope Francis emphasizes, “No one can face life in isolation… We need a community that supports and helps us, in which we can help one another to keep looking ahead. How important it is to dream together… By ourselves, we risk seeing mirages, things that are not there… Therefore, each one with the richness of his/her convictions, each one with his/her own voice, are all BROTHERS AND SISTERS”.

Thank you, Lord, for having gathered us here and for making us brothers and sisters in You! Help us know how to build and make this brotherhood bear fruit in the very environment in which we live. Do not let our hearts, our hands, our eyes close in front of their suffering.
To conclude this sharing, I would like to borrow the prayer of Mother Antoinette Fage, our co-founder of the Congregation of the Little Sisters of the Assumption, “Lord, show me the poor and I will run towards them with a truly fraternal heart; Lord, you will help my good will, you will make up for my inexperience. You will teach me to be respectful, delicate, and discreet towards their misfortunes.”

the community in Thủ Đức, Vietnam